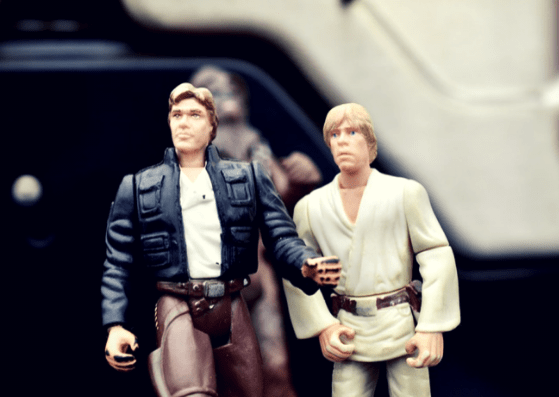 Those of us old enough to remember our very first Star Wars figure, were too young when they first arrived in stores to realize (or, care, really) what it took for them to become and remain a reality for the next 40 years, earning over $14 billion in revenue.

Primarily due to George Lucas’ desire to maintain absolute secrecy around Episode 4, most of the major toy companies turned down his bid to launch a brand new toy line in just six months.  A small Cincinnati-based company, though, was eager to take on the task and, as a result, Kenner Products scored a deal with Lucas and 20th Century Fox that would be unheard of today, making one wonder if the attorneys for Lucas and Fox were in the Mos Eisley Cantina the day the contract was signed.  For every dollar sold in the new toy line, Kenner was only required to pay to Lucas and Fox a nickel!  Rumors have it that, after two years of wildly successful sales of the toys, Lucas did send a “heavyweight” to attempt to renegotiate the deal.  Sadly, for Lucas, the contract also provided Kenner exclusive rights to the Star Wars brand in perpetuity so long as Lucas received at least $10,000 a year in royalties.  In other words, between 1986 and 1995 when Lucas claimed he would make no more movies and toys sales fell, Kenner needed only to write him an annual check of $10,000 to maintain its rights to the Star Wars brand.  Simple enough, right?  Unfortunately, not.

When Hasbro purchased Kenner in 1991, it apparently retained the same attorneys who represented Lucas and Fox in the original deal with Kenner in 1978.  Hasbro either missed or forgot about the $10,000 stipulation in the contract with Lucas and Fox and failed to pay it.  One year later, Lucas announced the production of Episodes 1, 2, and 3.  Since Hasbro had failed to maintain is rights to the Star Wars brand, a bidding war began amongst toy companies.  Ultimately, Hasbro prevailed over the others but only after agreeing to an 18% base royalty rate, giving up a minimum of 13 more cents on every dollar sold in the Star Wars line and a great deal more than if it had just remembered to write Lucas his $10,000 check.

So, what can be learned from Hasbro’s relationship with Kenner, George Lucas, and 20th Century Fox?