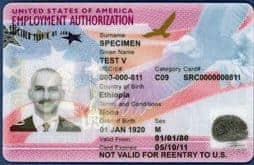 On September 5, 2017, Attorney General Jeff Sessions announced the rescission of the DACA, the Deferred Action for Childhood Arrivals. The Department of Homeland Security also issued the Memorandum on Rescission Of Deferred Action For Childhood Arrivals . Under DACA, certain undocumented immigrants brought into the United States as children received an Employment Authorization Document (EAD) and relief from deportation. After the rescission of DACA, a subset of recipients will be able to renew their EAD if it is set to expire between September 5, 2017 and March 5, 2018.

As an employer, you have an obligation to confirm an employee’s work authorization in a timely manner. Employers should consult the expiration dates on their completed I-9 FormS and I-9 compliance records to confirm EACH employee’s work eligibility. USCIS recently released a revised version of Form I-9, Employment Eligibility Verification. The easiest way to differentiate the new version from the prior version is to look at the version date in the lower left-hand corner. As of September 18, 2017, employers ARE required to begin using the updated Form I-9 with THE revision date of 7/17/17. Recently, Immigration and Customs Enforcement have increased ITS focus on compliance through Form I-9 audits and penalties, which means employers will need to focus more than ever on compliance in their hiring processes.