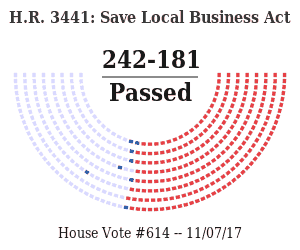 On Tuesday, November 7, the U.S. House of Representatives passed the “Save Local Business Act”, the latest attempt to reverse the precedent set by the Browning-Ferris decision which led to a broad interpretation of “joint employment”.

The Save Local Business Act, H.R. 3441, amends both the National Labor Relations Act and the Fair Labor Standards Act. It would change the definition of a joint employer to be a person who exercises “significant control over essential terms and conditions of employment” in a direct, actual, and immediate manner which is neither limited nor routine. This is a significant departure from the National Labor Relation Board’s 2015 Browning-Ferris decision which defined a joint employer as one who exerted “indirect or potential control”.

The passage of this bill follows a similarly-minded decision made by Labor Secretary Alexander Acosta. In June 2017, Mr. Acosta withdrew the Department of Labor’s Administrative Interpretations which defined joint employers in a similarly expansive way.

The bill will now head to the Senate. We will continue to update you on the latest in these changes to the joint employment definition.